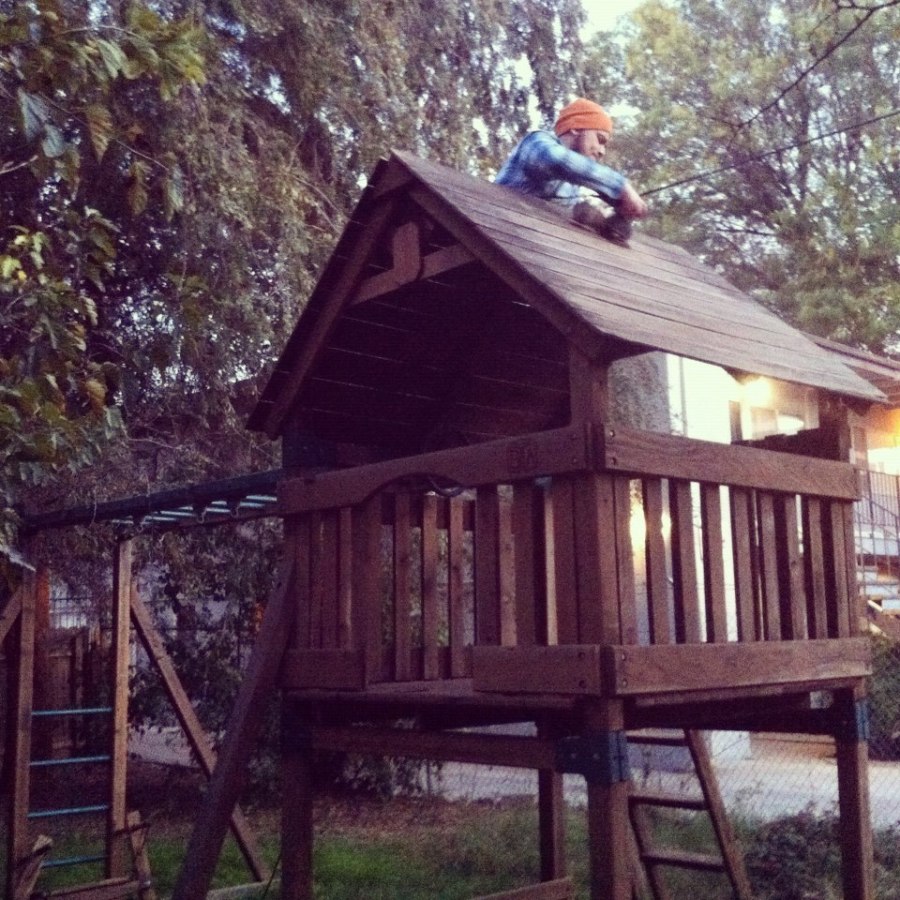 I’m filling up the sink with hot water to do some dishes when Quinn says, “Let’s go swing, Dad!  C’mon!  Let’s go swiiiiing!” and I say, “Quinnie, I really need to do these dishes,” and the final word hasn’t even left my mouth before I realize the utter absurdity of this statement.  Dishes?  Dishes?!  I have to do the dishes instead of swinging with you?

Outside in the back yard, Quinn hops onto the swing and Rory jumps onto the wooden horse and I push each of them in turn until they’re both pelting back and forth at heights and speeds that are beyond reasonably safe.  Quinn shouts, “Higher!  Faster!” and so I do, her head now going totally level with the top of the swing.

I give her one final shove and she pushes away from me, reaches the precipice and the swing seems to pop and comes down with a jerk that throws her a little off balance.  It reaches its back most position, rises, rises, peaks and drops and she jolts again.  As she passes the lowest point, her feet drag on the ground and she begins to say something that sounds part “Help,” and part scream.  About three quarters of the way up, she lets go of the chains and rockets off the swing and into the air while I stand helpless.  It’s all happening so fast.

She maneuvers through the air like a clown shot from a canon and comes down hard, landing on her butt.  She shouts, “MY BUUUTTTT!!!” and I quickly pick her up and brush her off and, trying to downplay the event, I say, “Are you okay?  Sometimes that happens.  No big deal.  Can you walk?”  She says, “Yeah…” and then crawls onto the horse with Rory. 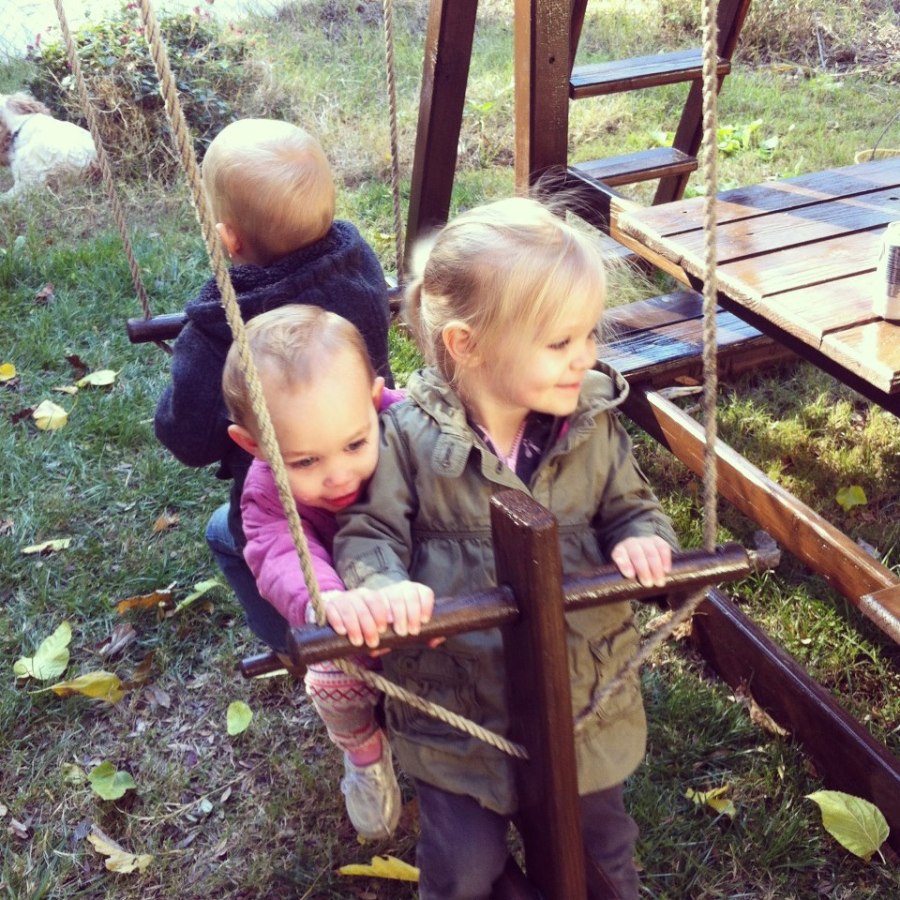 So I run up the slide, into the tree house and Quinn and Rory both follow suit.  Inside, Quinn spreads her hands wide open and says, “Welcome to my Little House,” and I look around and say, “I just love what you’ve done with the place,” and she says, “You want some food?” and I say, “Sure.  What have you got?”  She says, “Watermelon,” and sticks her hand into an imaginary box, pulls some out and hands it to me.  “It’s delicious!  What else have you got?” and Rory says, “MALT-O-MEAL!” and I say, “You have Malt-O-Meal up here?” and he says, “Yeah!”

So I ask for a bowl… and how about some sugar?  And some butter?  And some milk?  May I have a spoon to stir it?  Thank you very much.  And then I blow on it and taste it and it is just like my imaginary mother used to make.  I ask Rory if he wants a bite and he says, “Yes, please,” and so I tell him it’s hot and to blow on it first.  He does and eats off the invisible spoon and says, “Mmmmm…”

I ask Quinn if she wants a bite and she says, “Yes, please,” blows on the spoon and then bites my thumb.  “OW! YOU BIT ME!” and she smiles.

ABOVE: ONCE YOU SEE THE LURKING CREEPER, YOU’LL NEVER NOT SEE HIM.

Rory asks if I want to go down the slide and I tell him we should put the Malt-O-Meal in the fridge and clean up first (the irony being that I’m more concerned about cleaning up imaginary food before play instead of actual, real life dirty dishes).  He says, “Okay,” and takes it from me and, while he’s storing it, says, “It’s gonna be cold.”  When he turns around, he seems to have forgotten about the slide and says, “I’m still hungry.  You want a jelly sandwich?” and I say, “Sure, if you’ve got jelly,” and he says, “Yeah!  I do!”

He hands me bread and he hands me jelly, which I have him open, and then he hands me a knife and I slather the bread good and then cut it into three individual pieces so we can share.  I hand one to Rory and he goes to eat it but I say, “Wait!” and he freezes.  I hand one to Quinn and she cups it in two hands, staring at it.  Finally, I pick up my own slice, so thin it’s nearly invisible, and say, “Let’s clink them.”  This exercise essentially amounts to “Cheers,” or the clinking of glasses.  I taught them the cup thing a few weeks ago and now they like to clink everything from celery to chicken.  We’ve had to instill a rule at the dinner table that there’s only one clink per meal because two clinks is considered bad luck.

I say, “Ready, set–” and we all three say, “CLINK!” and knock our sandwiches together and eat.

“That was fantastic,” I say, “But not very filling.  Do you guys want to go inside and make some mac and cheese?” and they both scream, “YEEEAAHHH!” and we all disappear down the slide, Rory first and then Quinn sitting on my lap.

I go inside and, wouldn’t you know it, the dishes I need are dirty. 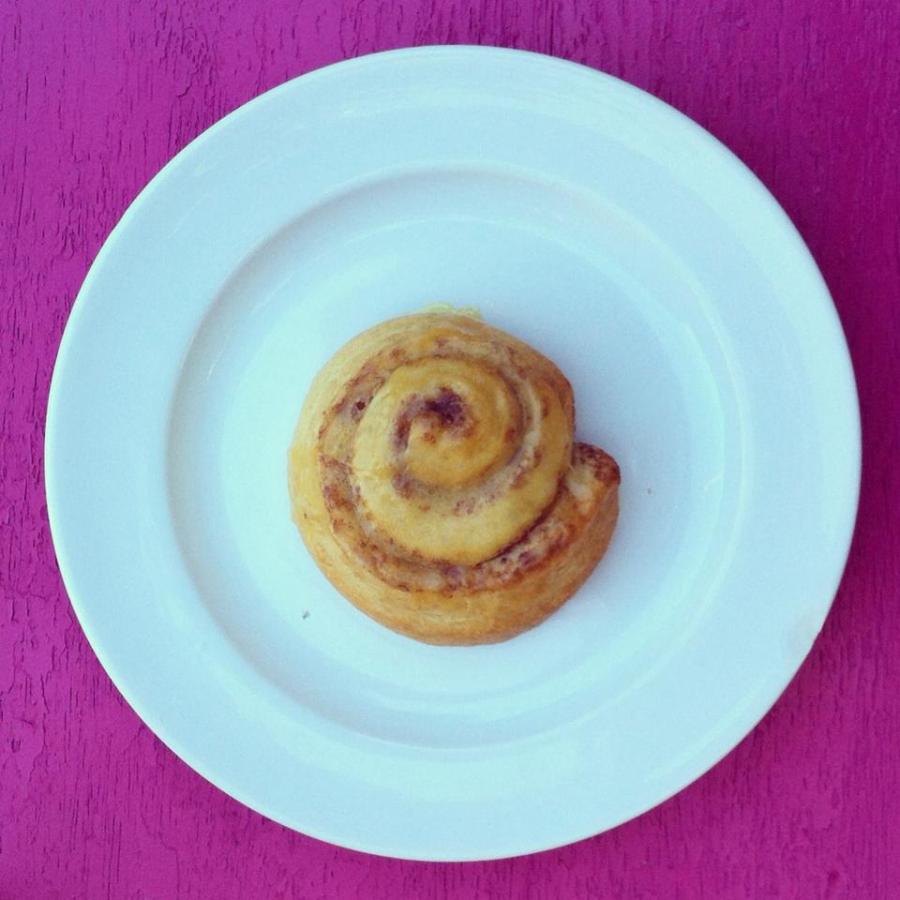 I grew up in a small town in South Dakota where the blackest kid I knew was a white guy named Andrew that wore Ecko hoodies on a regular basis and fancied the musical musings of Tupac and the Notorious B.I.G.  That isn’t to say that the town was filled with racially charged rednecks by any stretch of the imagination… there just weren’t any minorities (save Native Americans) that populated the area…

…until I was in seventh grade.

I remember The Black Family that moved in right across the street from us and the girl and boy, who were cousins, I believe, that began attending school with me.  It wasn’t until this point, me being 12, that I had actually seen a black person that shared my demographic in real life.  My Phys Ed teacher in elementary school was African American and he’d regularly make jokes about having dark hands and light palms.  This was a funny gag when I was a child but it’s only now that I understand what he was trying to do; he was attempting to take an impressionable group of kids and turn race differences into a kind of off-hand joke and show us that it didn’t matter.  He was black but he was just a teacher like everyone else.  He was funny and he had five fingers and we were the same.  He knew that at some point we were going to turn into adults and we would be exposed to all of the nasty stereotypes of racial profiling and the fear-mongering that comes along with it and he was trying to stay one step ahead of the game.

Now, twenty-some years later, the racial diversity is one of the things I love most about Los Angeles.  A day doesn’t pass where my kids aren’t surrounded by at least four different ethnic groups.  In fact, living in Van Nuys, being white actually makes us a minority behind Hispanics, African Americans and varying cultures of Asians.  Side note, I hate that, while I write this, I’m terrified of using the incorrect terminology when describing someone’s race.

I took my children to the park today on a Dad-Date and when I arrived, there was only one other fellow there – a half white, half black guy, about my age, who’s son looked exactly like a four year old version of Will Smith.  He had these great big, shiny eyes and that really charming smile that gets him all the parts.

My kids meander over to the slide together and not forty-five seconds pass before Will Smith Kid approaches them, points at a wooden mouse that has been designed into the forest decor of the playground and says, matter-of-factly, “That’s a mouse.”  Rory looks at the kid and says, also very matter-of-factly, “That’s a squirrel,” and the kid says, “Nope.  That’s a mouse.”

And that’s it.  For the following hour, Rory and this boy were inseparable.  They climbed and ran and balanced and jumped and swung and played and when the Will Smith Kid went to his dad to ask for something, Rory followed right along and sat down while they did whatever business they attended to.  Those old song lyrics,  Ebony and Ivory, living together in harmony, pop into my head and I’m not sure if it’s funny or racist.  That R word gets thrown around so often, I feel like I’ve actually been accused of Hating Blacks just because I’ve had the audacity to publicly disagree with some of Obama’s political maneuvers.

I sit on a bench, watching the kids and marveling at how easily they integrate with one another – not just racially, but socially.  As far as I knew, neither of them had even asked the other’s name at this point and, even though they weren’t really speaking to one another, per se, there were no awkward silences.  In my head I try to prep myself for Rory asking me why the boy’s skin was a different color.  How would I respond?  What would I say?  How could I be poignant but prose?  I would need to say it in a way that was certain not to minimize The Other Child and not somehow offend the parent.  I end up with, “Some people just have different color skin.  Like shirts.  His shirt if blue and your shirt is red but you’re both the same.”

Of course, neither child asks because neither child cares.  This is 30 years of racial diversity training being projected onto me by myself.

Behind me, the gate creaks and I turn to see an older father walk in with his son, a scrawny kid in a red baseball cap.  The dad says something in Russian and the kid takes off towards the sand pits, carrying a bucket filled with beach toys with him.  He finds some shade, takes a seat and begins to dig.

Quinn leans over to me and says, “I want to play with those toys,” and I say, “Those toys belong to that little boy.  Why don’t you go ask if he wants to share?” and without pause or hesitation, she runs to him and sits in the sand and says, “You want to share?” and he hands her a shovel and then Rory and Will Smith Kid are there and the four of them, from four different backgrounds are all playing together in the dirt.

The Russian Kid, as far as I know, didn’t even speak English.  His dad would periodically shout things at him in that broken tongue that reminds everyone of Vodka and mobsters but the child never said a word.  Just shared and played, happy to have friends.

Looking about, I keep wondering if I should go talk to the half white / half black guy – Will Smith Kid’s dad – but then I think, “What?  Approach him out of the blue?  Awkward and Creepy.  What do I say?  Ask his name?  What’s he do?  What music is he into?  How old is his son?  And then what?  Awkward Silence.  Maybe he just wants to hang out alone… looks like he’s playing on his phone anyway…”

I look back at my kids, or rather, this group of kids – some new girl has joined the club while I’ve been lost in thought – and I think about all the things I’m trying to teach them and then think that it wouldn’t hurt me to take a lesson or two from them from time to time.

I end up leave without speaking to the man.