No Concern of Danger

I’m sitting at a friend’s house, at a Superbowl party.  The game is on but, like most people at Superbowl parties, I’m not really watching it.  Like most people, I come for the queso and stay for the deep fat fried turkey.  Everywhere I look are close friends, good acquaintances and strangers who, judging by their honest faces, have the strong potential to someday be either.

The man next to me, Curtis, is one of my closest friends and is currently holding my youngest daughter on his lap, letting her spittle and saliva run over his thumb and down the back of his hand.  This is the sign of true friendship.  At my feet his daughter, three, plays with my twins, also three.  I am grateful to avert my eyes from The Big Game to focus instead on their little one.  Rory picks up a green truck and begins to slowly push it across the polished wooden floor, making noises that sound like the imaginary driver is grinding the imaginary clutch.  I slide off the couch, reach forward, grab him by the foot and pull him to me.  He squirms and laughs and fights me off and says, “NO!” but I say, “Play with me!” and I take the green car and he crawls away.  I roll it across the ground and Rory retrieves it for me.  I give him a hug and kiss him on the cheek and say, “Thanks for bringing this back.  I love you…” and he wipes off my kiss and runs away.

Later, I’m standing outside as our host lowers a turkey into a deep fat fryer.  The oil rises, the turkey sizzles and the smell of cooking bird immediately fills the air.  The Host clinks his beer against my coffee cup and says, “I hope I don’t burn my house down,” and I silently nod in agreement.  The front door opens and Rory pokes his head out, looking from side to side.  He lays eyes upon me and says, “Daaaaaaad?” and I say, “Yes, Rory?”  He walks out the door, leaving it hanging open, walks down the steps, makes his way across the driveway, approaches me, standing toe to toe with my person, looks up into my face and says, “I want a cupcake.”

A reasonable request.  I say, “Okay… let’s go get you one.”  He leads me back across the driveway, up the steps, through the door, past the TV, to the table and points at a tray of frosted pastries.  He says, “That one.  The green one.”  I grab it, put it on a plate and, just as I’m getting ready to cut it up for him he says, “No… I can do it.  I can eat it.  By myself.”

He’s growing up and it pains me.

Sitting down on the floor I convince him to let me hold the cupcake and feed him because it’s so messy.  When we’re finished, his lips, chin, teeth, fingers and hands are covered with green frosting.  Without thinking he wipes his face on his shirt and asks for another cupcake, a request which I deny.  Instead I take him into the kitchen where I begin to press a wet a paper towel against his face and hands.

How much longer will this be acceptable?  When will he push me away, embarrassed? 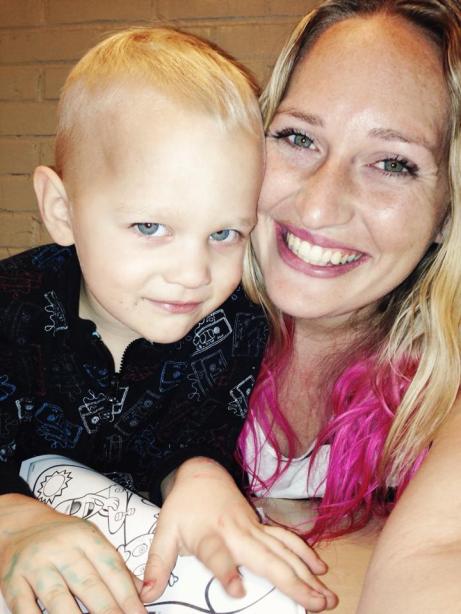 The game ends and the slow murmur and shuffle of people gathering their items begins; jackets, car seats, tupperware, car keys.  My wife puts shoes on the kids and packs Bryce away while I wander through the house aimlessly, saying needless good-byes to people.  We both thank our friends for hosting the party and then walk out the door, into the light drizzle.  In my right hand I carry Bryce’s car seat and in my left hand, Rory and I grip each other tightly.

Having to have parked on the street, we make the long walk down the driveway of the gated community, through the gate, and into the wet street, the neighborhood being one of these places that simply doesn’t have sidewalks.  The van is about a block and a half up and the street is fairly isolated so there is no concern of danger.

The group of us walk and talk and we praise the children for playing nicely and for sharing and for being so good.  We walk and talk and say that we had so much fun.  We walk and talk and I turn around and say, “Here comes a car,” and all of us push to the side of the road until it passes.  We continue to move towards our car, twenty feet away, so close, which is nice because I’m starting to feel the weight of the baby seat on my right arm.

Rory begins pulling at my hand and I say, “Rory, we’re walking in the street.  You need to hang onto Daddy’s hand,” and he says, “I don’t want to!” and I say, “You have to,” and I say, “We’re almost to the car,” and then I turn around and see another automobile coming towards us.  I holler behind me, to Jade, and say, “Another car, step aside,” and we push ourselves towards the side of the road, in between two parked cars.

Rory tries letting go of me again and I say, “Rory, stop it,” because now he’s just being naughty and he knows that he needs to hold my hand.  He jerks once, twice and then screams, leaning backwards.  I say, “Rory.  Rory!  RORY!” and then he gives one final scream and then everything else happens fast.  Too fast.

Rory jerks his hand free from mine and I feel him slide out of my grip.  His little body stumbles backwards, foot behind foot.  The dark road suddenly goes bright with headlights and I cry out and Jade shouts, “RORY!”  He takes two more steps, out past the parked cars, into the street, and my stomach turns into a knot.  I reach out but he’s gone, too far away.  I drop Bryce and try to move but I know I can’t make it in time.  He steps on his shoelace and his body tumbles to the ground.  The car – a large black SUV – comes up on him and my breath catches in my throat.

Rory shuts his eyes and I want to but can’t.

The SUV blasts past him no more than a few feet away.  If he hadn’t stepped on his shoelaces… if if if… the possibility hangs in the air like a vampire.

I take three large steps towards my son, grab him by the collar and lift him into the air, his feet dangling, and I forcibly drag him back to the curb while he still, to my great amazement, continues to attempt to pull out of my grasp.  I drop him on the hard concrete, squat down, grab his face in my hands and squeeze his cheeks so he can’t look away from me.  I say, in the absolute angriest tone I can fathom, “Rory!  You do NOT let go of Daddy’s hand when we’re in the street!  You were almost run over and KILLED by the car.  That car almost RAN YOU OVER.  You almost DIED.  You do not ever, ever, EVER let go of my hand EVER AGAIN.  Do you understand me?!” and, instead of confirming with me he simply begins to scream and pull at my hand saying, “LET GO OF ME!  LET GO OF ME!”

I grab Bryce and begin to march to our van at double speed, dragging him behind me, scared, angry, furious.  I open the back door and say, “Get in your seat,” and, instead of listening, he says, “NO!” and so I pick him up, throw him into the car, crawl in after him, pick him up and throw him into his car seat.  He screams, demands candy, which totally baffles me, throws his hands in the air and screams again.  I thrust his arms through the straps of the car seat and say, “Candy?  Candy!?  You’re not getting candy!” while in my head I’m just thinking, “Thank you God thank you God thank you God that I get to buckle him in tonight kicking and scream I love him I love him I love him…

On the way home all I can think about are small coffins and cemeteries that I can’t bring myself to leave.

I almost lost him.

I could never forgive myself.

We get home and I put pajamas on Rory, put him to bed, kneel down next to him and whisper prayers in his ear, prayers that only he can hear.  I say, “Dear God, thank you for Rory, thank you for giving him to me, thank you for protecting him tonight.  Thank you for everyday I have with him.  Thank you for blessing me with another night with this beautiful little boy,” and I pull back and I look upon his face and I see him in a new light.  I see how blue his eyes are.  I see the swirls of designs in them.  I see how little and how white his teeth are.  I see the perfect gaps between them.  I see his blonde hair, pieces sticking up in the back, his little fingers poke over the blanket and I see that his fingernails are filthy with perfect dirt.

Everyday with my children is a beautiful gift that makes me sick with despair and anxiety.

94 thoughts on “No Concern of Danger”