PUTTING THE ANCER IN CANCER

Had a doctor’s appointment with an oncologist (that’s a cancer specialist NOT someone who’s just on call all the time, like I originally thought). The building was a little scuzzy – the type of place where all the bathroom doors are locked and you’ve got to ask for a key that ends up being taped to a pen or a spork or a giant clown shoe or something – and we waited just past an hour post appointment time before getting behind the giant wooden door that separates the lambs from the slaughter (you know the feeling when they call your name) before being shifted through three different doctors until they finally landed us on one that didn’t have any information on us.

After he’d gathered our files and played 20 questions he quickly let us know that:

2. I now had Stage 2 cancer and he wanted me to start chemotherapy the following Wednesday……which as I write this, is actually today.

He also let us know that there are two different kinds of cancer – NON-SEMONOMA and SEMONOMA. I have NON-semonoma, which is the more aggressive of the two. From there, non-semonoma breaks down into a few different scattagories and, wouldn’t ya know it? I HAVE THE MOST AGGRESSIVE VERSION OF THAT!!!

…..but I just did – the sweet sweet gift of cancer. Oh, thanks Santa – coulda went for the lump of coal, but I guess this’ll do just fine.

We had an appointment with our urologist the other day. He said my cancer markers BEFORE surgery were 32. POST surgery – 619. Today: 900.

This is a huge leap……….in the wrong direction. The doctor wanted me to go the hospital THAT DAY, get a catscan and see what it is we were dealing with. 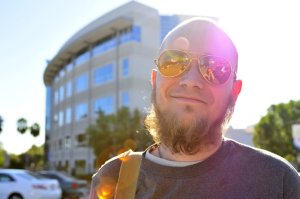 Got checked in last night, got the scan and today they told us that the some “nodules” had shown up on my lungs. 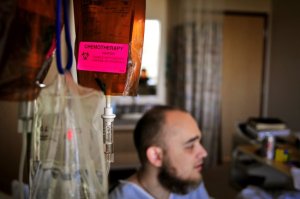 About two hours later I started chemo and am just currently finishing it up. Jade and I watch each drip-drop into the tube, down into my vein and talk about how each drop is me getting a little bit better. 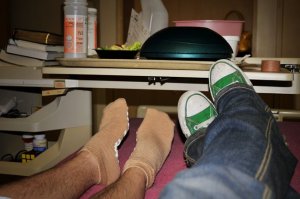 So far I feel good. In fact, I feel great. GREAT. The doctors are all EXTREMELY adamant that this is going to deal with it. The chemo is going to eradicate this sunnabitch from my bod.

IN THE FUTURE THEY WILL SAY:

“CAN YOU BELIEVE THEY USED TO GIVE PEOPLE CHEMO??? They poison them to cure them – how savage! Luckily the scientists have found the cure for cancer in oil – TOO BAD WE USED IT ALL TO DRIVE AROUND OUR SUVs WITH ONLY ONE PERSON IN THE CAR AND NOW THE POLAR BEARS ARE ALL DEAD BECAUSE OF GLOBAL WARMING!!! YAAAAY!!! THE FUTURE REALLY IS A BRIGHTER PLACE – BUT ONLY BECAUSE THE ATMOSPHERE HAS FINALLY DISSOLVED AND THE SUN IS SHINING DIRECTLY ON OUR REDDENED, BURNT SKIN!!! YAAAAY FOR TECHNOLOGY!!! YAAAAY!!!”

I’ve got about nine weeks of this and then I’m like Fred f’ing Astaire, tap dancing and karate kicking my way back to work.

Oh, and lastly, wasn’t there a movie we were making or something like that??? Oh yeah there was and we’re still pressing forward with it.

YOU BEAR WITH US AND WE’LL SEE THIS THING TO THE END YET!!!